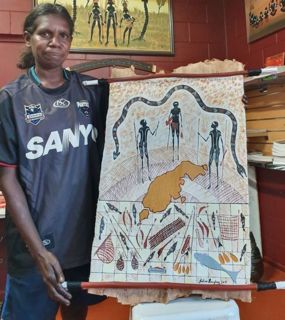 Joelene is a proud Lardil woman and belongs to the Langunanji clan. She was born in Mt Isa in 1982 but grew up in Mornington Island. Her Language name is Madar meaning the stem of the water lily swaying in the breeze.

Her Father is Leon Roughsey, the son of Tim Roughsey, brother of the famous artist and author Dick Roughsey. The Roughsey's homeland is Langunganji (Sydney) Island, south-east (larumben) of Mornington Island, a part of the Wellesley Island's, also known as the larumben people.

Joelene's mother Monica, has a twin sister, they were born in Cloncurry Qld. When they were young the family moved back to Mornington Island.

Joelene's great grandmother was born on the mainland. Later she was sent to Mornington Island and was adopted by the Roughsey family, who grew her up during the Mission Times. The Presbyterian Church established the mission on Mornington Island in 1914.

She grew up on her father's homeland, Ganthawu. Her younger years were spent playing with her friends and siblings out bush; learning how to find food from the land. She remembers this as a pretty great time. She also spent a lot of time with her grandmother during her early years.

In her early years she attended Homeland school and was taught by Teacher's Aide, Coralie Thompson who is now an artist at the Art Centre.

Joelene's parents were very active in the church and often travelled for Religious studies and as a result she spent some time in Townsville and Cairns. Joelene attended boarding school in Darwin for a couple of her high school years.

Joelene is an accomplished painter and is part of the next generation of Lardil artists. Many of Joelene's pieces have been inspired by the work of her famous grandfather Goobalathaldin Dick Roughsey (1920-1985). Her work depicts traditional stories and cultural practices.

Joelene is also a dancer with the Mornington Island Dancers. She has performed at the Cairns Indigenous Art Fair and local community events.

Joelene's daughter was born in 2012. She is raising her girl to be strong and proud. She is determined to keep culture strong, and is passionate about sharing Lardil stories and culture with her daughter and nieces.